Every month I go to a fair in Rochester to sell my stuff. I usually bring an assortment of candles, wax melts, clay diffusers, herbal sachets, and other fun seasonally appropriate things. Lately, since we're working up to Halloween later this month, I've been bringing a larger-than-usual collection of hand-painted scrying mirrors.
Eyebrows start to lift as people tried to figure out what these black mirrors are for. Two months ago I added a sign that gives a basic explanation of how to use a scrying mirror. 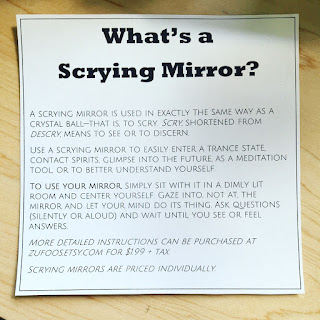 I thought this would be helpful to customers, especially the ones who look like the last thing they want to do is talk to me (hey, I totally get that). However, I find most folks now eagerly start reading the sign and, just about when they get to the second paragraph, their eyes get wide, like suddenly they're reading something they aren't supposed to and they're worried they'll get caught.
This isn't always the case, of course. Many people are excited by the brief description given and ask me more questions.
But it's these people who seem to be afraid of the mirrors that intrigue me. They represent a surprisingly large subset of Americans who, despite not really believing in spooky stuff like ghosts and tarot cards, are actively afraid that those things might be real and, even worse, might be out to get them.
It's usually these people who will talk about how evil and dangerous Ouiji boards are and there's usually a story to go along with that belief. I mean, probably not a story about using the board, but more likely their kid brought one home and they threw it out. Very heroic.
But to be fair, this fear is real. These people are actually scared that if they use a scrying mirror or a Ouiji board or get their cards read or what have you, well, there's a chance that an invisible bad thing will start following them around and make their life all Amityville-like. It's largely Hollywood that has perpetuated this fear. Films like The Craft, Hocus Pocus, Rosemary's Baby, The Exorcist, The Blair Witch Project, and so many more have capitalized on our fear of the unknown. They all focus on "evil" or being possessed against our will, or satanic cults secretly plotting against us.
I love a scary movie (Rosemary's Baby and The Exorcist are my all-time favorites!), but I never really developed a fear of the occult, like many do, after seeing these films. I'm sure there are lots of circumstantial reasons for this, perhaps one of them being the inherent queerness of it all. I was a gay kid who didn't fit in and whom no one understood. I was naturally drawn to the occult, something no one understands. It felt like home to me.
But most people don't feel this way. They grow up with a low-key fear of witches and psychics, worried that they might actually have supernatural powers, and, if they did, what sort of horrors could they manifest?
This attitude is a frustrating one for modern-day witches, pagans, and spiritual-types to encounter. The occult is complicated, as is magic, and none of it really quite works the way one would expect.
Now, this is only the opinion of someone who has been studying and practicing the occult and witchcraft for close to 20 years. Other folks will have other opinions, but here are some points I've come to understand in my time witchin' it up:
Looking at all of this, it's easy to see that the occult isn't anything to be afraid of. If you don't like something, don't do it. If you don't like how something feels, tell it to leave. You've got the power, baby. When we reach this point of understanding, we can start to see the occult as what it is: a beautifully complex and inviting system of self-discovery, self-actualization, and a way to spiritually connect with all that is.
Therefore, using a scrying mirror isn't scary. Unless, of course, you're afraid of seeing what's inside you. But listen, we all have to come to terms with that reality sooner or later, and it's in your best interest to do it now.
This Halloween, why not sit down with your scrying mirror and find out what's inside you? Looking deep into your soul and figure out who you are. It's easy to get lost and disconnected from ourselves in this world we live in. There is always some drama to deal with, some terrible thing to loom over us. We're so connected to everyone else that, often, we lose ourselves in it all.
So take your mirror and sit in a dimly lit room and just be there. Open your heart and invite yourself in. Look into the mirror and see what you'll see, feel what you'll feel. Your mirror is a tool to aid in meditation, communication, and introspection. You are safe, and all is well.
If you'd like more information on how to scry, please see my ebook A Brief Introduction to Scrying. Looking for a scrying mirror? All you need to do is paint one side of a piece of glass black. Make your own or find one that speaks to you.

[Editor's Note: This post was salvaged from a past Zu Foos website. The publication date is, therefore, approximate]
Labels: spirituality