An Open Letter to the Mayor of Rochester, NY

The following letter is one I wrote and sent to Mayor Lovely Warren of Rochester, NY, as well as Adam Bello, Monroe County Executive, and several local news organizations.

Hello. This is the fourth time I've contacted the City of Rochester regarding signage installed and maintained by the city. As of today, I've received none of the additional information I've requested.

The signs in question are located on Carter street, one just north and the other just south of the route 104 overpass. The signs say: "Keep the change // Don't support panhandling." 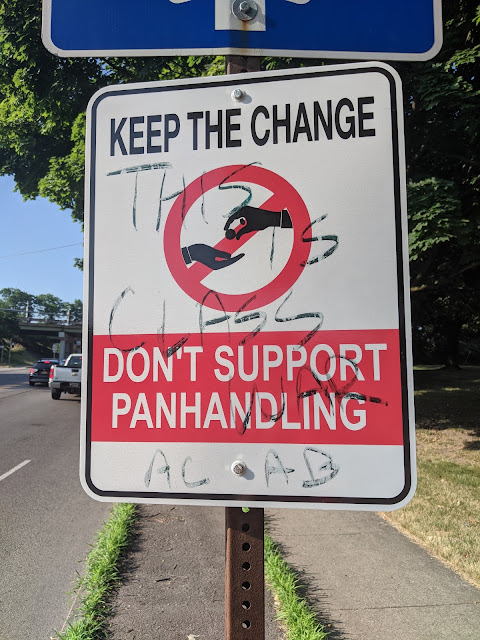 I've written in the past (and regularly posted on Instagram, tagging the accounts of the mayor, the city, individual city council members, the Monroe county executive, the mayor's chief of staff, as well as local news organizations) asking for the following information:

- why were these signs installed?

- what person or committee approved this? At who's request?

- did anyone consider the optics of installing these signs during the worst pandemic any of us have seen?

I've noticed that since the signs have been installed, they have been vandalized at least three times. Not only have the signs been cleaned each time, but there appears to have been additional lighting installed in the area.

This leads me to additional questions:

- what is the mayor and the city of rochester doing to address the problem of poverty and homelessness in the city?

- instead of posting signage that only makes the mayor appear out of touch and uninterested in helping those most at need in our community, why are we not exploring options to end homelessness and poverty?

- I searched the city website to research initiatives the city has taken to address homelessness and poverty, and I did not find anything. Can you speak to that?

- if your solution to homelessness and poverty is asking your citizens to not give money to the poor, is it safe to say that you're taking an "out of sight, out of mind" approach?

- since you cut the police budget by a whopping 4%, do you plan to reallocate those funds to the homeless? Perhaps build tiny homes for them, or create a system of support and human connection?

You don't owe these answers to just me, but to the entire city. Your complete disregard for those who are the worst off in our community is shocking to say the least. You need to stop choosing to actively hurt the people who live here. Stop waging class warfare and use your power (and our tax dollars) to lift people up. End homelessness in our city.

It's been over a month since I initially reached out to your office. I'm also sending this email to local news organizations because you need to answer these questions. Maybe if you aren't interested in talking to me, you'll talk to a reporter.