Ecclesiastes and The Star 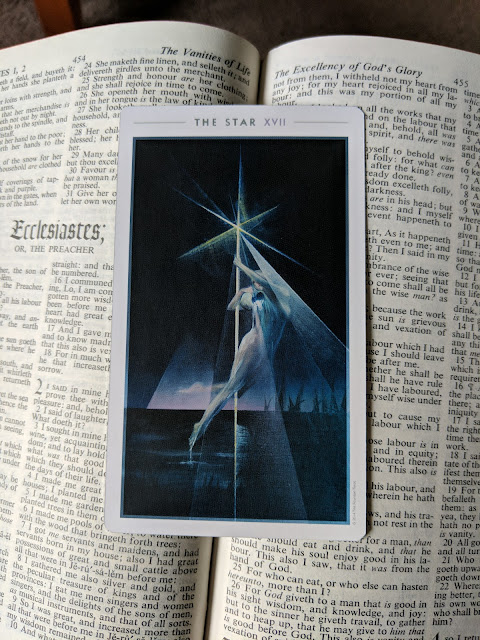 Yesterday [I started writing this on the morning of 11/13] I awoke from dreams that were so vivid, so real, that I felt truly wrong when I left them. It felt almost like falling asleep had let me slip into another reality, or maybe that I awoke in the wrong reality. The dreams weren't really bad or good, just mundane situations involving people that I know to be dead and situations that are so out of the realm of possibility for me that they felt foreign.

I moved out of bed and headed to the living room to draw a tarot card for guidance on this odd situation. Since I was feeling vulnerable and shaken, I picked a deck that I've always found very soothing and gentle: The Fountain Tarot. Very simply, I asked what I needed to know today. After lots of shuffling and some cutting of the deck, I pulled The Star.

While the meanings of tarot cards generally remain the same across decks, each deck imparts their own flavor. Because of that, I like to dive into what is actually present on the card before I start remembering key words and correspondences and such.

Here I saw a woman seemingly pulling herself out of the water with the aid of a star, behind her is darkness and possibly the ruins of buildings. The darkness and the jagged shapes give me a sense of unease, damage, fear, and tragedy. The Star, though, shines a literal light in the dark and reaches out a beam to allow the woman to pull herself up from the muddy depths. The star is hope. It's both the symbol of a light in a dark (keeping hope in one's heart) as well as the practical application of said hope (following the light to safety).

Verbiage in the guide book that came with the deck made me think about the song Turn! Turn! Turn! by The Byrds, so I looked up the song, listening to it and reading the lyrics. I've found that when my mind makes jumps like this, it's best to just follow and see where it leads me. I see the tarot as a tool to interact with the subconscious mind, so it makes sense that my mind would seek out other tools to arrive at something I can understand. Tarot might lead to music.

Researching the song led me to the inspiration for it: Ecclesiastes chapter 3. I was unfamiliar with the book as a whole, so I read it. And, frankly, it was amazing. I ran into so many different jumping off points for introspection and thought.

All the rivers run into the sea; yet the sea is not full; unto the place from whence the rivers come, thither they return again. (Eccles. 1:7)

In this book, a person who claims to be a king of Jerusalem, son of King David, waxes poetic on lessons he has learned in his life and attempts to find meaning in it all. Right away, he declares that all things are meaningless. "All is vanity!" (Eccles 1:2)

While there is debate over whether the book is a deep spiritual message, or deeply pessimistic, I was struck, and soothed, by the connection with impermanence. Perhaps that is just a weird part of my own psychology, but I've always been deeply comforted by the idea that all of existence is wildly dynamic, always changing and evolving into something else. Any thing or idea that I leave behind when I die will eventually also fade away and will be lost to time. It is this way for all things, and for all people, and that's just the nature of existence.

It seems our author has come to the same conclusion. He realizes that the concept of "leaving your mark" or seeking fame and fortune, or any type of "immortality" is completely meaningless. It is a total waste of your life to focus on those things. Conversely, he goes on to say that even the wise man will die the same death as the unwise, and that his work is just as meaningless as any other work. All is vanity. All is meaningless.

While this is a pretty broad claim, and one that certainly can be read as pessimistic, I don't think it's a mistake that the phrase "under the sun" is used again and again in the text.

The phrase is used as a qualifier for many things, and while I think it's fair to interpret it as a poetic way of saying "everything in the world," I think it could also be literal. There is nothing new under the sun. The author could be saying that in the physical world we inhabit, all is meaningless. This experience is but a lens through which we experience existence, and that when we get too wrapped up in that physicality, we lose track of the ultimate truth: that all is new beyond or above the sun.

All of this is to say that reading Ecclesiastes (through an admittedly gnostic lens) gave me deeper understanding of The Star. It's not just about hope or a light in the dark, it's also about the forever cyclical nature of the universe. Sure, right now times might suck, but they won't last; they can't. All things are connected and all things are caught in the ebb and flow of the universe.

The Star is more than hope: it's knowledge. The stars are part of the universe. There never will not be stars. The moment they are gone new stars are formed. Everything always continues, and life will move past this imbalance, swinging upwards into good times, and then eventually lower into bad times, repeating this over and over forever.

This is the way of the physical realm, I believe, in his realizations that physicality is meaningless, the author of Ecclesiastes is telling us to explore non-physicality. It is there that we can fully understand our oneness to God and to all that is. That place, that space, that brief moment of perfect balance in the ever swinging hand of fate, is God. Ecclesiastes teaches us that literally everything under the sun is of no consequence. Not only is the world under the sun rhythmic and reliable, but ascending past this barrier is our only goal.

I believe this is the intended message of the book because of how the book ends. Ecclesiastes 12:9-12:

9 Not only was the Teacher wise, but he also imparted knowledge to the people. He pondered and searched out and set in order many proverbs. 10 The Teacher searched to find just the right words, and what he wrote was upright and true.

11 The words of the wise are like goads, their collected sayings like firmly embedded nails—given by one shepherd. 12 Be warned, my son, of anything in addition to them.

Of making many books there is no end, and much study wearies the body.

Here we learn that wisdom, sayings, holy texts, even, are not, in themselves, the answer. All of these things are only catalysts, jumping off points, for our own discoveries.

Many scholars believe the last two verses of the book to be a later addition to the text, because the tone and style is so different from the rest of the writing. Eccles. 12:13-14:

here is the conclusion of the matter:

Fear God and keep his commandments,

for this is the duty of all mankind.

14 For God will bring every deed into judgment,

including every hidden thing,

whether it is good or evil.

Without this little "fear God" addendum, our teacher has left us to end on the line "much study wearies the body." The author is asking us to not spend too much time figuring out the "correct" interpretation or set of wisdoms. Instead, he asks us to read these words, and then launch into our own non-physical investigation, transcending above the meaninglessness of physicality for ourselves and truly understanding what IS.

Therefore, The Star isn't just about hope. It's about moving beyond The Sun, beyond physical reality, and achieving enlightenment, or oneness with all that is.

The Star is an invitation to identify and see the cycles around us, to realize they are meaningless, and to move beyond them.

The Star isn't just hope; it is knowledge.