Yesterday I took a low "tripping" dose of magic mushrooms for the first time. In the past I've micro-dosed on shrooms and found it quite pleasant. I took the dose, went out to a park, and just laid back and looked up at the leaves moving in the wind. I felt at peace and connected to nature in some subtle way that I can't really describe. Being that I'm always looking to explore different aspects of reality, I jumped at the chance to buy a mushroom edible. 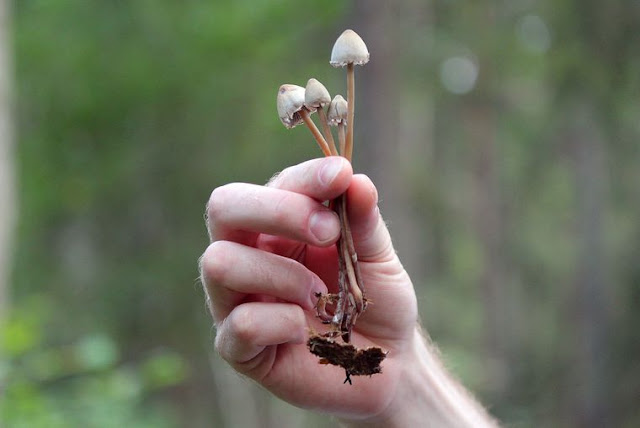 The dose I bought was one edible (tasted like milk chocolate, which, being that i'm vegan is not ideal but whatever) that contianed 1.25 grams of dried mushrooms. I had read that a typical trip could last 6-8 hours, so I ate it not long after I woke up, about 8:45 am.

The first two hours were alright. I felt calm, grounded, at ease, and surprisingly normal. Like, it felt like I was on my way to a trip, but never quite got there. It could be that I need a higher dose, or that taking an SSRI just makes it so I can't really trip on psychadelics, which would totally suck.

At about the three hour mark I felt "high," that is, I felt similar to when I smoke a little weed, but not spacey at all. Just like, elevated, somehow. After that the sensations started to decrease. I did not experience any visual or auditory hallucinations (that i'm aware of), and once 6 hours had passed, I felt like it was time to continue on with my day. So, I smoked a little weed and started working on my online business presence. That's when things started to take a sharp turn to negative-ville.

I have mostly deleted my social media accounts in the last few years. 2017 was a year of absolute mental and emotional breakdowns for me, so it was then that I started seriously thinking about why I use social media and what it brings me. I ended up deleting my facebook account and my twitter account, deciding to only stick with instagram as a way to interact with my friends and share things that I like. I have 4 accounts: a personal account, a Zu Foos business account, a Zu Foos Designs account (focused on art), and an "after dark" account that you don't get to learn anything more about haha boo for you.

The Zu Foos business account has fallen into disuse and I have moved away from a "business" mindset and have adopted more of a "creative" mindset, hence the two different, yet similar accounts.

I have seen the new(ish) feature on instagram where you can shop directly through the app. I thought I might be able to increase business if I had an etsy shop (which I already do) and also could sell items through instagram. So, I sat down to figure out how to do this.

In order to sell items on instagram, I needed to change my account to a business account (Zu Foos Designs is a "creator" account, and when I tried to change it to a business account, it warned me about losing a bunch of features, so I put a pin in that), connect that account to a facebook business page, create a catalog of items to sell on said facebook page, and then integrate them with instagram.

This sounded mostly like a giant pain in my ass, but wtf, this is the job I wanted, right?

Long story short, it was an incredibly frustrating experience that did not result in me being able to sell on instagram. Etsy, it turns out, does not communicate with almost any other service, meaning that I would have to manually recreate all of my existing item listings for facebook, MEANING that a sale on etsy or facebook/instagram would not update the listings on the other service and I'd have to manually change the listings whenever I made a sale. I've been in this boat before and I'm not going back. I just want to make artsy shit and sell it. Its not that serious.

I considered that maybe Etsy had been the wrong choice from the beginning (lots of issues with that company, but it's been the main selling company I've used for the last 10 years) so I looked into other ecommerce services.

Here's the thing: Zu Foos isn't a small business. Its a micro business. I don't do the sales volume to make something like shopify worth the work and money, and I don't want to do that kind of volume, honestly. I just want to be able to sell the few things i make easily.

But, having done all that and coming up empty handed, I discovered that all the ads in my instagram feed were now for shopify. And I had a melt down.

I do wonder if the mushrooms and/or weed helped get me here, but suddenly it felt like I could see everything. It felt like I could see through all the bullshit and despite feeling very Holden Caufield about everything, it felt like I could now see The Truth, and The Truth is that this planet is full of awful greedy self-serving people who literally are farming value off the masses and there's really not a way to break out of that structure. Even running away to live in the woods is illegal if I don't own the land or pay taxes on it.

How can this country be free if we don't have the freedom to opt out of it?

And that's it, folks. I spent the rest of the evening just intensely depressed, a level of depression I haven't felt in a long time. It felt like my only options were to 1) just play the game that makes everything worse or 2) kill myself. And I don't want (now or then) to actually be dead, I just want to, like, exist in a way that isn't fucking awful.

I went to bed early and slept a long time. Today I feel better, less like the walls are closing in, but I still feel that Truth in the background. I still know that a small group of people exploit the whole planet so they can buy expensive clothes. And, I just don't know what to do about that.

I started by own business so i could shill myself instead of shilling for other people, but that's not what I'm doing. I'm, instead, shilling for instagram, or etsy, or facebook, or wordpress, or google, or whatever. I can't just create something from nothing, and it's set up that way. Its set up to convince us we have free choice, but we don't. It's all be planned by rich ass holes.

And that's where I am.